We have a plan!

It’s always good to have a plan!

Due to our somehow complicated circumstances we couldn’t aim for building just a house. A house which would fit our needs and our wishes for space and storage capacities would never be financeable for us. The prices for building plots and costs for conventional house building are skyrocketing for decades in Germany. A big part of that immense costs are caused by laws and regulations well paid politicians burden down on people and the buiseness of house building itself. Binding land-use plans are another way of authorities to restrict freedom and rise costs. It is not random that the term “VERBOTEN!” was invented in Germany!

Here’s what we plan.

We came up with a plan of several phases. The first thing – beside getting the plot and the needed permissions – is a place to store our stuff and get a shelter to live in provisionally. But we have no money to waste, so what we want to build have to be useful thru all the phases of our plan and even beyond.
As we will not have enough money the actual house build has to wait till our financial situation becomes hopefully somehow better (more on that later).
So the first build will be the construction of a kind of a workshop barn art studio with a small living compartment in it, which can be later changed into a workbench and general maker/tinker/multi purpose space. 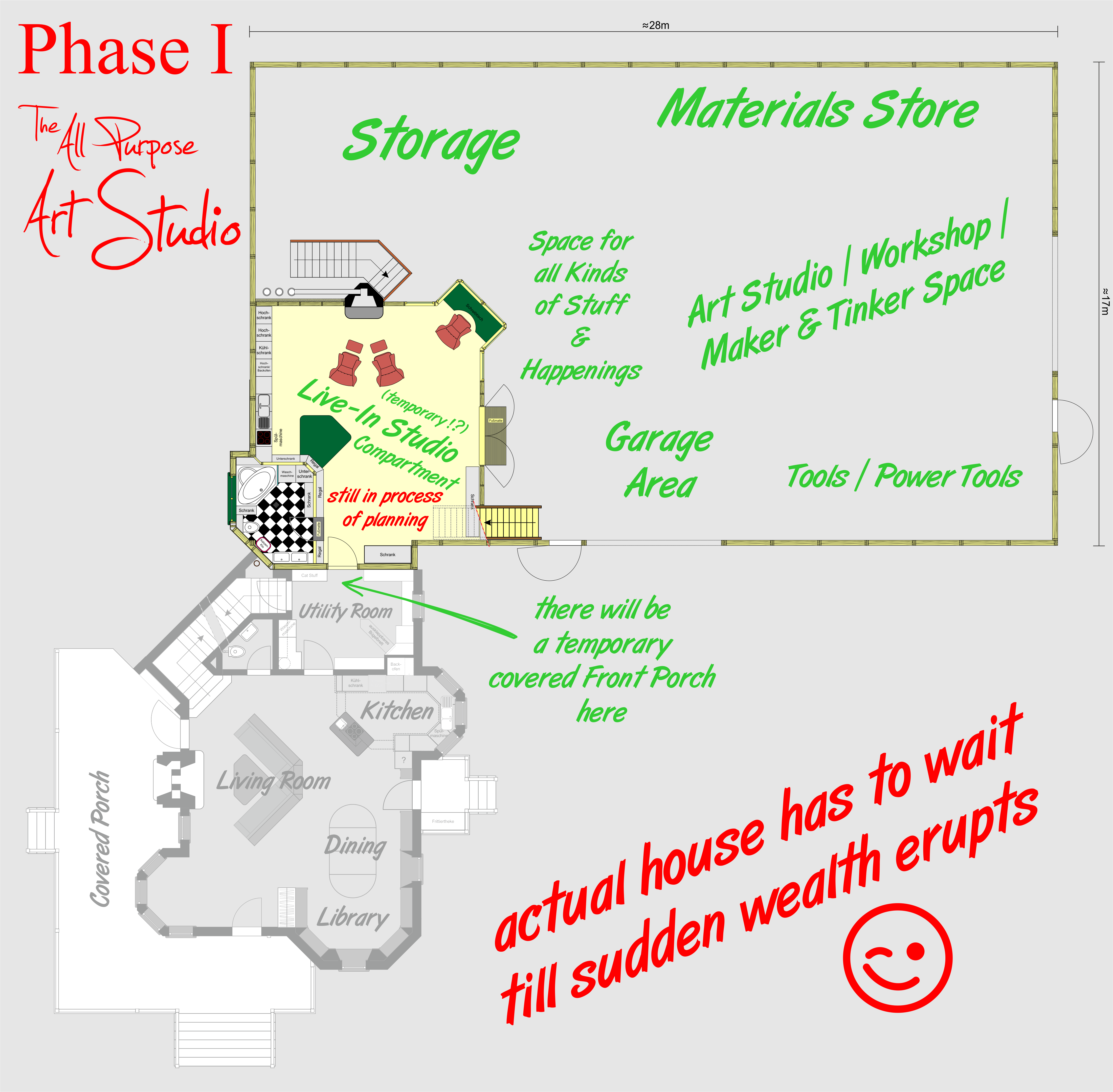 The All Purpose Art Studio is the solution.

The barn-like building we are planning to build has to serve so many purposes. Shelter, art studio, storage, workshop, garage and a future well of income, if things align how we anticipate them, and it will serve perfectly as a space of opportunities for most thinkable projects. Altough such a barn is an overall larger structure than an average house it is less expensive and less elaborate – superficially speaking – and therefor way faster to build. But still the barn built will eat up the biggest amount of what we will have to our financial disposal.
There will be several obstacles to overcome, we have to find a building plot were such a building is permitted and it also has to be as cheap as possible, but is still big enough to have space for a future house and an appropiate sized garden, we also want so desperately, to raise crops and some few animals such as chickens. The latter is also very restriced in Germany and is therefor not allowed at more urban plots. So going far out to search the hinterland will be the way to go.

Not much to beef about that. In general it is very convinient to live in a big city, especially when your are that lucky as we are at the moment to live at a very nice spot. Not all too near to downtown but also not too far away either. Our neighborhood is quite ideal, but the disadvantages unfortunately outweigh the advantages, at least from our current perspective. And both of us are no longer in the age to appreciate the bustling city life the appropriate way. So time for us to clear our place to give people a chance to pursue their inner-city happines as we will ours in the countryside.

Disclaimer!
This is not intended to instill fear! Obviously we don’t want to induce any kind of violence and we never ever want to infest the very vicinity we desire to withdraw ourselves. We will come in absolute peace! So no need to worry! But we like that song – enjoy nevertheless!

« Adding to the drama of YouTube » Ready? Homesteady? Go!